Skip to content
HomeExploring the sea floor with video

But Western Australia’s Kimberly coast has extremely high tides that create treacherous currents that make it too dangerous for divers.Watch a video about how the tides work. Not to mention the tiger sharks   and crocodiles that infest these waters!

Plus, we are interested in parts of the sea floor that are too deep for divers (40-100 metres deep).

How do you see what is on the sea floor when it is too deep or too dangerous for divers?

AIMS have developed a solution – attaching a camera and a video camera protected in waterproof cases to an aluminium sled that can be towed behind the ship using a long strong cable. This is called the tow-vid system (see below). A powerful strobe light illuminates the sea floor for the video.

The ship’s powerful winch lifts the tow-vid system into the air and the crew carefully guide it into the water. Note how everyone involved is wearing hard hats, life jackets and steel toed boots!

Once the tow-vid is submerged and lowered to the sea floor, the ship slowly moves along a predetermined 1.5 km long transect line at a constant slow speed. The video camera continually records and transmits to a computer on deck.

Watch a sample of what the tow-vid saw today near Augereau Island.

Still photos of the sea floor are taken at regular intervals and downloaded once the tow-vid is back on deck. Later, back on land, scientists analyse these to identify the species of animals and plants they contain.

Examples of still photos from tow-vid on this trip are on the left : top = sea cucumber, middle = sponge, bottom = feather star.

While the ship is moving along the tow transect, two scientists are responsible for keeping the tow-vid on track, and recording data as it operates.

First, a tow vid technical expert (in our case, Neill), watches a computer screen which shows live footage from the underwater video camera. He uses this as a guide to change the speed and direction of the tow-vid via the winch so that it doesn’t hit the bottom, and also so that it is close enough to the bottom to be able to see the habitats and creatures there as clearly as possible.

Second, a marine scientist (in our case Marcus) watches the live video footage and regularly clicks a button on the smaller computer screen to record what type of habitat he sees on the sea floor in a computer database. This can be used to create maps of the study area.

Back on dry land, spatial scientists then use this data to map where various habitats were found. The first step is to colour code each location where Marcus made an observation as a point along the track the ship towed the tow-video system.

To end for today, below is a map of where we are working today. The red line shows the path followed by the RV Solander. The blue numbers show were we plan to run tow video transects. 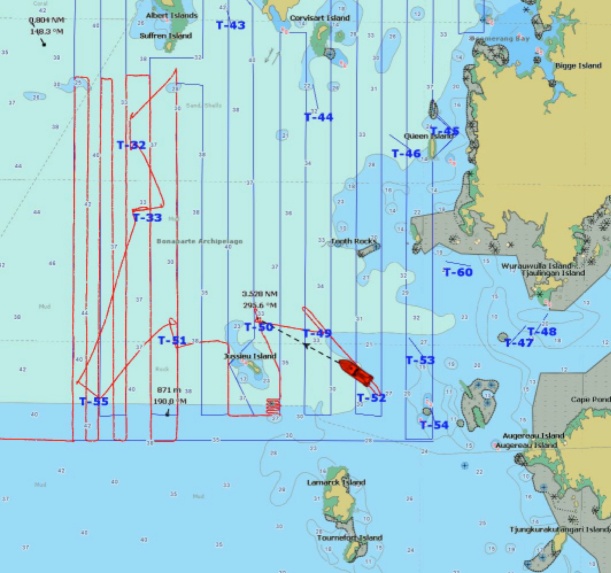 I hope you are enjoying this blog! Leave a comment and let me know what you think. I will post again in a day or so.

2 thoughts on “Exploring the sea floor with video”