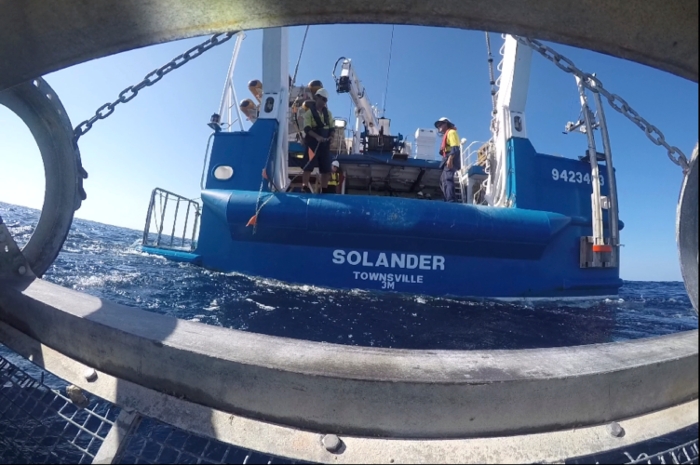 Because we are relatively close to the equator (our latitude is ~14.5 degrees south), the weather is very hot and humid – sultry, in fact! In this part of the world, the winds in summer tend to be relatively calm. Indeed, we’ve experienced near still waters on many a morning (see previous blog ‘Buzzed by sharks’).

Everything changes very quickly, though, if a small but intense storm – called a squall  passes over us. Squalls are relatively common in the tropics in summer and we’ve already experienced a few on our journey. In today’s blog, I will show you an example of what happens when a squall passes over a ship at sea.

What is a squall?

A squall is characterised by a sudden and dramatic increase in wind speed and the onset of rain. When you are at sea, the strong winds whip up whitecaps on the water, in starts to rain, and it is time to ‘batten down the hatches’! Historically, this meant to close all the doors (hatches) on the ship and use wooden battens to make sure they stayed closed as the weather got rough. For us, it means to secure all gear that is on deck so it doesn’t blow away or slide off the side.

Yesterday (13 December 2015), we were in the middle of a towed video transect, oohing and ahhing at live video of sponge gardens near Ripple Rocks (eastward of the Maret Islands) when we realised a squall was headed our way. I ran out on deck to take pictures of the dramatic, towering squall line clouds about 10 minutes before they engulfed the RV Solander. In the picture below, notice how the cloud layer closest to the ocean is very dark.

The photo above captures just one small section of the awe-inspiring squall line clouds we saw. Watch the movie below to see what the entire squall line looked like before it passed over us:

The very calm seas around us made a stark contrast with the roiling clouds in the distance (see picture below).

The squall passes over

Within minutes, the squall began to move over the ship. The darkening clouds gradually took over, until only a sliver of sky remained streaked by the sun setting behind the Maret Islands (see below). You can’t tell in the picture, but the wind was blowing so strongly I could barely hold my camera. Gusts of wind sent horizontal streamers of salt spray scudding across the rapidly building waves. The picture does not do justice to how surreal it was to watch the peaceful scene of golden sunset gradually give way to relative darkness. 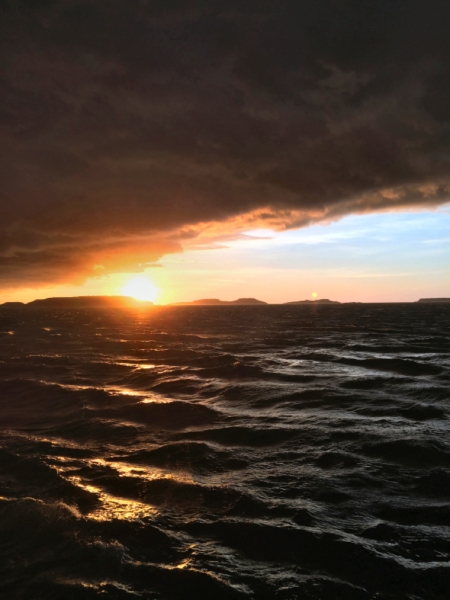 It was time to pull in the towed video and secure it on deck (see below). All of this was done just in time as the rain set in and dinner was served.

No lightning struck near us or was visible during yesterday’s squall. We did see some lightning on 6 December when another squall passed over the Solander. I don’t have pictures of it as it was already dark when it happened. Rob estimated wind gusts of about 60 knots (for about 30 minutes).

Watch a video of lightning I filmed in thunderclouds in the distance earlier in our journey. That storm front never reached us.

On-board, we use weather radar to track the passage of the squall or even a larger storm. Weather radar (see examples below during two squalls that passed over the Solander during our journey so far) uses a sound pulse just like sonar, but through the air instead of through the water. When the sound pulse hits an object, it bounces back to the ship’s radar sensor. The time it takes to bounce back and how strong the sound is that makes it back helps determine where rain is falling and how much.

Thanks for reading – see you next time!