Welcome back! We are now on day 6 since arriving in the study area, see where we are . It is Wednesday 9 December 2015, and we’ve completed nearly half of our journey.

So far, we’ve seen many sea stars of all shapes and sizes (see some examples below).

Sea stars are marine animals that live throughout the world’s oceans. They have been found as deep as 6,000 metres below the surface.

They usually have 5 arms (as in the photos above), but some types have many more. If one of their arms gets chewed off or otherwise damaged, they can grow a new one! But it might take months to years to do so.
They have tube feet, but usually move quite slowly – a typical speed is just 16 cm per minute!
Sea stars normally eat tiny animals that live on the sea floor. But Tritons , crabs , fish, seagulls and sea otters like to eat them. Some sea stars try to stop other animals eating them by making chemicals to give themselves a yucky taste, or by oozing mucous (the slime star ), or by squirting poison, or by growing body armour!
Today we confirmed that the AIMS towed video system (see previous post) detected a special kind of sea star – a crown-of-thorns starfish on the fringing reef at the north-west corner of Maret Island. This is important because this type of sea star – called COTS for short – prefers to eat corals and can destroy entire reefs under certain conditions.

What is a crown-of-thorns starfish?
These sea stars, called COTS for short, prefer to eat corals – specifically the soft fleshy polyps that combine to form coral colonies. They get their name from the long sharp spikes that stick up all over their bodies which look like thorns (see below).

Watch the video of the COTS we found at Maret Island


Look closely and see if you can spot it

Watch a video created by AIMS about COTS to learn more.

Look closely and see if you can spot it.

Did you know that the crown-of-thorns starfish…
• Is one of the largest types of sea stars in the world?
• Squeezes its stomach out through its mouth to put it directly on the coral it is eating?
• Can have up to 21 arms?
• Can give you a painful sting with the long, sharp spines?
• Under certain conditions, can destroy entire reefs in an ‘outbreak’? 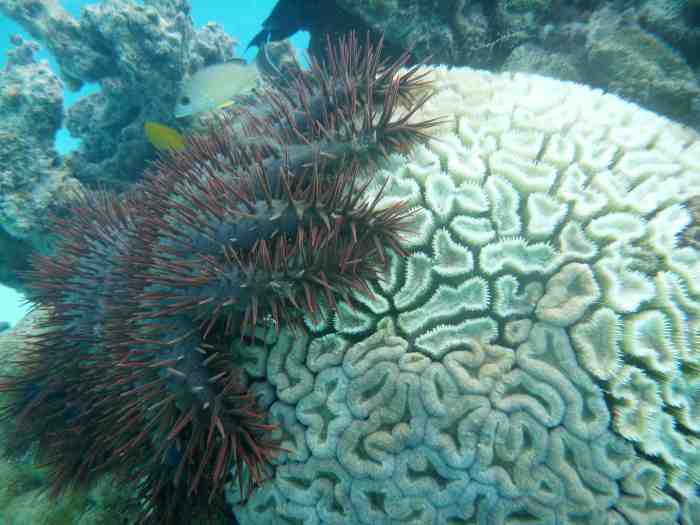 Adult COTS feeding on coral. It pushes its stomach part way out of its mouth and digests the coral while sitting on it.

How do COTS outbreaks threat reefs?
Under normal conditions, COTS exist on reefs in small enough numbers that damage to coral is minimal. Every now and then, however, conditions are just right to favour the survival and growth of COTS and their numbers reach plague proportions (see picture below). When this happens, it is called an outbreak and entire reefs over many kilometres can be stripped bare of live coral.

Because of this, it is very important to know that COTS also exist as far north as Maret Island so scientists can investigate whether they could pose a threat to the reefs of the Kimberly coast.
The COTS in the AIMS video above from Maret Island was clearly visible which means that it was an adult. Baby COTS tend to hide and are even hard to spot for divers looking closely to try to find them. This implies that more COTS might be present at Maret Island than just the one that we saw.

Thanks for reading – see you next time!